What is a paradigm?

A pattern of something; a model.
A worldview underlying the theories and methodology of a particular subject.

A paradigm is a way of thinking or a way of seeing things.

The following video illustrates an important aspect of the current changes in world view affecting our society today:

Since Copernicus, humanity has been adjusting to the idea that the earth revolves around the sun.  Now, we are collectively adapting our world-view from the heliocentric model with circular orbits… to one which is based on spirals, vortices and the torus.  This shift in perspective triggers subtle but far-reaching effects in every aspect of our  lives, whether we realise it or not.  A shift in our understanding of the world and the universe initiates fundamental changes to our perception of reality.  The Copernican revolution shook the foundations of philosophy and science having widespread implications for society for hundreds of years, the aftershocks can still be observed… and indeed, we are also experiencing fundamental changes in our society that are catalysed by the shifts in perception spreading as a result of discoveries occurring in the field of science.

What is New Paradigm Education?

All over the world, exciting new discoveries are being made… new approaches are being implemented… fantastic techniques are spawning amazing results in every domain imaginable… new teaching methods which reaffirm learning autonomy are being disseminated… re-establishing education as one of the most exciting environments one can possibly inhabit.

As the world slowly moves towards a new chapter in human history, it is of critical importance that education reflects that change. Teachers were never supposed to be unquestionable guardians of knowledge but signposts… pointing to where we might find our own answers.

The modern education system, built on the Prussian model, was designed, developed and implemented by some powerful people with very questionable motives.  It is time to re-evaluate educational philosophies and modify all of our teaching practices to a student-centred approach.

A challenge: How many primary shapes can you see here?

What if you were to learn that the figures above are all secondary shapes and that for 2000 years we have been falsely taught the circle, square and triangle were primary forms?  This realisation is often a visceral experience which seeds a fundamental shift in our awareness and this is one of the things New Paradigm Education can help with in relation to our understanding of form and number.

What is a paradigm shift?

A paradigm shift is when our world-view is fundamentally transformed.

This picture provides an interesting example… 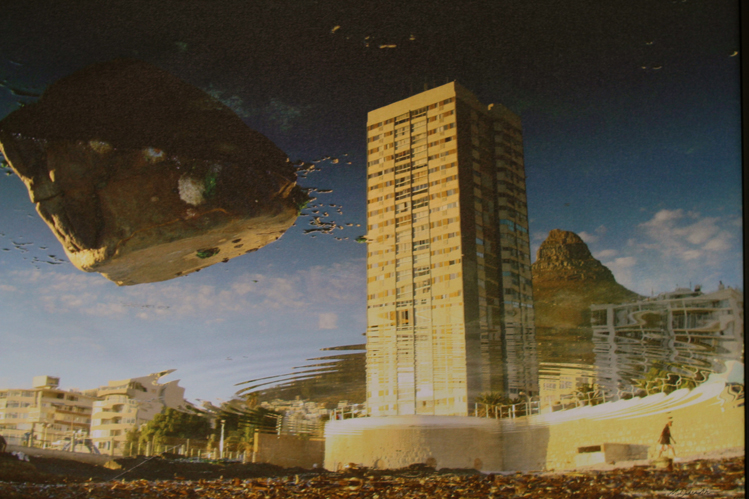 Original photograph taken by Mark Tabbron. No effects, no retouching, no post production or camera trickery in any way.

This is NOT an artist’s apocalyptic vision of a meteor colliding with civilisation. This untouched photograph is merely an inverted picture of a pebble protruding from a puddle with a reflection of the scenery. Totally innocent and completely harmless. This picture was taken on the seafront in Capetown, South Africa and we can see Signal Hill reflected in the background. The “shockwaves” were simply the result of the photographer throwing a small stone into the water to set off some ripples. The change required to transform a situation frequently lies in the perception of a perceived problem. Every difficulty is an opportunity for growth and many ‘problems’ are not what we perceive them to be at all. This is an incredible parallel for what is happening on Earth today. What may seem like humanity on the brink of self-destruction could be nothing more than labour pains for a whole new chapter for humanity which is being birthed as we speak.

If humanity is to thrive, instead of just survive, on this planet, it is of great importance that we change our paradigm from the disconnected, separated, fear driven, competitive mode to a more co-operative, connected, conscious, biosphere-centred mentality.

For a very long time humans have been considering themselves to be separate entitities… singular subjects observing an objective universe. This has now been debunked scientifically and philosophically. The truth is that the universe is one fluid entity… a form of cosmic goo… a vibrating energy… and we are all united in our diversity.

On a more esoteric level, we can say that the current social/intellectual/spiritual paradigm shift is mirroring the changing view of the solar system… an evolution from circular orbits into spiral forms, where each rotation moves on through time and space, never inhabiting the same space twice.  Stepping out of the familiar cycles of violence which have been endured for countless generations, we must learn to emulate what nature models for us so perfectly, by cooperatively embracing our differences, embracing mystery… whilst we progress further towards ever increasing levels of peace venturing onwards, like Spaceship Earth and our galaxy,  spiraling deeper and deeper into the unknown… exploring ever new realms of physical and mental space.